The potency of various chamomile teas varies, with some containing significantly more chamomile than others. The more potent teas are also more likely to cause side effects in people who are vulnerable to them. Consequently, it is safest to start with a low dosage and work up to larger doses slowly.

Chamomile contains chemicals called flavonoids. These flavonoids are a type of nutrient present in many plants, and they play a significant role in chamomile’s medicinal effects.

Researchers are not sure yet what other chemicals are present in chamomile specifically and account for its benefits.

The potential benefits of chamomile tea, for which there is the most evidence, include:

Again, some studies have found that chamomile tea can lower blood sugar in people with diabetes. Research does not show that chamomile is a viable substitute for diabetes medications, but it may be a helpful supplement to existing treatments.

Similarly, a 2008 study of rats found that consistent consumption of chamomile tea might prevent blood sugar from increasing. This effect reduces the long-term risk of diabetes complications, suggesting that chamomile could improve diabetes outcomes.

Osteoporosis is the progressive loss of bone density. This loss increases the risk of broken bones and stooped posture. While anyone can develop osteoporosis, it is most common among post-menopausal women. This tendency may be due to the effects of estrogen.

A  found that chamomile tea might have anti-estrogenic effects. It also helped promote bone density, but the study’s authors caution that further research is needed to prove this apparent benefit.

Inflammation is an immune system reaction to fight infection. Chamomile tea contains chemical compounds that . However, long-term inflammation is linked to a wide range of health problems, including hemorrhoids, gastrointestinal pain, arthritis, autoimmune disorders, and even depression.

Some studies suggest that chamomile tea may target cancer cells, or even prevent those cells from developing in the first place. However, research so far is inconclusive, and scientists say more work is needed to prove chamomile’s anti-cancer claims. Also, most research has looked at clinical models in animals, not humans.

A  compared the cancer-fighting powers of marigold and chamomile teas. Both were able to target cancer tumors selectively, but the effects of marigold tea were more potent.

6. Helping with sleep and relaxation

Chamomile tea is widely thought to help people relax and fall asleep. Few clinical trials have tested this, however.

In one review of the current evidence,  are quoted as having fallen asleep shortly after consuming chamomile tea. A handful of other studies looking at clinical models also suggest that chamomile tea may help people relax.

A review looking at the  is inconclusive. Some studies show a modest anti-anxiety benefit, but others do not.

Anecdotal evidence and  suggest that inhaling steam with chamomile extract can relieve some of the symptoms of the common cold. But this benefit is not proven yet.

A  study found that applying chamomile extract directly to a wound assisted healing. Likewise,  have found that chamomile ointments may help with eczema and mild inflammatory skin conditions, although they are not as effective as hydrocortisone cream.

Who should avoid chamomile tea?

The following groups should avoid chamomile unless advised otherwise by a doctor:

It is also not safe to use chamomile as a substitute for proven medical treatments. If someone is taking any medications, they should ask their doctor about potential interactions with chamomile tea.

How to prepare Chamomile ?

1. Harvest the fresh flowers by removing the entire flower head from the stem. Rinse the chamomile flowers in warm water and pat dry. Chamomile tea is best made using freshly harvested flowers. If necessary, it is possible to store flowers in the refrigerator for up to 48 hours. Wrap the petals in a wet paper towel and store in an airtight container.

2. Boil water in a tea kettle or large pot on the stove. Infusion tea kettles are the best option for fresh flower teas since they have built-in devices to keep the petals separated. Alternatively, you can use another infusion device such as a tea ball or  cheesecloth as a makeshift tea bag. Always use pure or spring water and not hot tap water when brewing tea to preserve flavors.

3. Place flower petals in an infuser and let the tea steep in the kettle or pot for 5 minutes.

4. Remove the flower petals and optional mint leaves before pouring into a teacup. Enjoy! 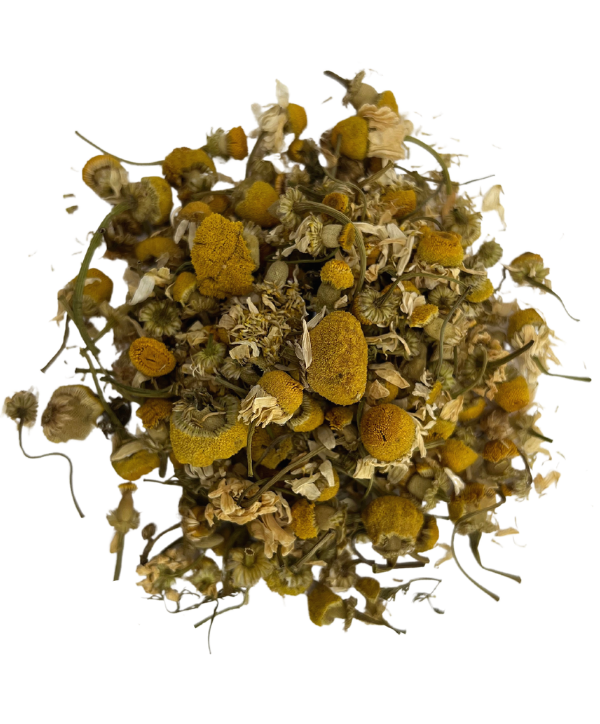